Emulsifiers are auxiliaries which mix two immiscible liquids into a finely divided mixture. They find application in the pharmacy, food industry, oil industry, in the household and in cosmetics[1].

What are emulsifiers chemically? 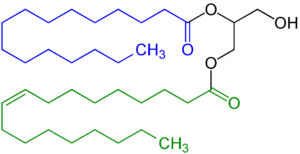 Emulsifiers are similar to surfactants. They lowered the surface tension between two substances, thus allowing a fine distribution of these. They always have two substructures, a strongly polar e.g. by several polar groups as in the polyols, and a nonpolar e.g. a fatty acid. As a result, they are soluble in polar and non-polar substances. Approved as food additives are often the mono- and diglycerides of edible fats. These are characterized by a glycerol molecule which has esterified at one (mono) or two (di) sites a fatty acid. Also, they may be esterified with carboxylic acids, e.g. with acetic, lactic, citric and tartaric acid. Also, they may be esterified with sugars, e.g. the polysorbate 80[2].

Where are emulsifiers used?

Emulsifiers are used in the food industry, i.a. in pasta to protect it from drying out, or else to mix and stabilize water-oil mixtures, e.g. Mayonnaise. In the household they serve e.g. as an ingredient of detergents. In cosmetics, they function as bodying agents, surfactants for mixing oil-water mixtures, and as light detergents[3].

What are you doing in cosmetics?

In cosmetics emulsifiers are often used to produce stable emulsions. These are used for creams, shampoos etc., and serve in addition to the consistency of the correct mixing of water and oil. Polysorbate 80, lecithin, xanthan gum, gum arabic or sucrose esters of fatty acids, e.g. Sucrose stearate used. They give the cosmetics a pleasant texture, and mix oil and water into a single mass[4].

There are studies on emulsifiers and others. Polysorbate 80 and carboxymethylcellulose, which show that these substances in mice led to a disturbance of the intestinal flora. Thus, the wild type (genetically unchanged) did not suffer from a so-called colitis, but were metabolic syndromes, including a slight weight gain and an increase in body fat. Another group of mice (with deficient weakness due to a missing gene), which was already very susceptible to bowel disease and inflammation, showed an increase in this after the same time of testing and concentration (1% carboxymethylcellulose and 1% polysorbate 80, to 12 weeks) Susceptibility from 40% to 80% [5]. However, this affects only the oral intake, ie the consumption of these substances, but not the external application [6].

Ärzteblatt Articles on preservatives and colitis[5]

Articles on emulsifiers and why they are used[4]