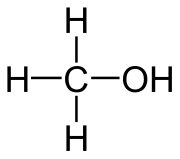 Here is the difference in organic residues, with:

And the number of -OH groups and their valence, with:

Also, there are so-called fatty alcohols which have long carbon chains from 8-22C upwards, e.g. the cetyl alcohol with a chain length of 16 carbon atoms.[3]

How do alcohols come from?

The production and formation of alcohols varies from alcohol to alcohol. Ethanol is obtained by fermentation of sugar with the aid of the Saccharomyces cerevisiae fungus (yeast fungus) under exclusion of air [4]. Methanol has been converted into wood by the dry distillation of wood, but nowadays more economically by the reforming of natural gas, with carbon dioxide and hydrogen reacting together to form methanol [5]. Isopropanol is obtained by addition of water to propene [6]. Tert-butanol is produced by water addition to isobutene [7]. Ethanediol is prepared by the addition of water to ethylene oxide [8]. And glycerol is obtained as a by-product of biofuel production, but can also be produced by influencing the Saccharomyces cerevisiae fungus instead of ethanol [9]. Most fatty alcohols are made by saponification of waxes. [10]

What do we use alcohols for?

In general, alcohols are used as solvents, including methanol, ethanol, cyclohexanol and glycerol. Depending on their properties, they have many other uses. Ethanol e.g. Highly known as a stimulant, the word "alcohol" usually refers to ethanol, and is present in all alcoholic beverages, from draft beer to high-proof absinthe [11]. Isopropanol is used as a disinfecting, cleaning, defoaming and antifreeze agent [12]. Glycerin is used as antifreeze and lubricant, as well as a moisturizer in cosmetics [13]. Fatty alcohols are used as surfactants. [14]

What are "good" and what are "bad" alcohols?

Whether good or bad depends heavily on the quantities and the concentration, because: "The quantity makes a thing a poison". As with alcohol, small amounts are not a problem, even healthy. In contrast, larger amounts are harmful [18]. Only the harmful minimum dose counts. For glycerol or propanediol, this is very high, i. That it takes large amounts to become harmful [19]. For example, in ethanol is this moderate, so that a quantity in the range of a few tenths to almost a few hundred milliliters can be harmful [20]. However, under certain thresholds, the positive effects can be exploited without creating negative ones. Thus, ethanol is e.g. taken in very small amounts dermal, amounts that make no difference, and certainly not in the quantities in which ethanol is contained in cosmetics [21]. Methanol has a very low harmful minimum dose, so even 0.1g per kg of body weight are dangerous, and 1g per kg of body weight life threatening [22].

Ethanol is taxed in Germany, in order to escape this enormous cost increase, many producers pay the liquor. The Vergällen happens via the addition of phthalates, which arise from petroleum, and in addition to the damage to the skin can make even impotent. Denatured alcohol can be recognized by the terms "Alcohol denat." And "SD Alcohol".[23]

However, there are also some manufacturers, especially natural cosmetics, who do not use denatured alcohol, this is referred to as so-called "alcoholic spirit". This alcohol is pure, 96% vol, ethanol[24].

Are there any non-alcoholic cosmetics?

Yes and no. If a cosmetic article is "non-alcoholic," it means only that it does not contain bad, dehydrating, or otherwise harmful alcohols. It does not mean, however, that no alcohol is included[25].

Which alcohol-based cosmetics are harmless, and what must be respected?

Generally, be careful what you buy. When buying, pay special attention to the ingredients and their INCI name. Products with "Alcohol denat." And "SD Alcohol" should be avoided. Glycerol and propanediol are safe and give a good, healthy, skin feel. Ethanol with the designation "ethanol" or "ethyl alcohol" is largely harmless, but its concentrations vary from producer to producer, but is dispensed sparingly by high costs. And fatty alcohols such as cetyl alcohol are generally harmless.[26]

Parabens in cosmetics - how dangerous are they really?

Polyethylene glycols in cosmetics - how harmful is PEG?