Phospholipids are fats (Lipids lat. Lipos - fat), with a phosphate group (PO4). They make up a large part of every cell, and belong to the polar lipids [1].

What are phospholipids chemical?

Phospholipids are long chains of hydrocarbons, the fats, each of which is populated with a phosphate part that acts as a head. They are natural surfactants, with a nonpolar tail and a polar head. As a result, they dissolve in fats and water. There are three subcategories:

- phosphoglycerides; They are phospholipids with a glycerol backbone

- sphingomyelin; They are sphingolipids with a phosphate group

- plasmalogens; You have an unsaturated alcohol instead of a fatty acid. They make up 50% of the phospholipids of the heart, and 10% of the central nervous system. Their exact function is not yet clear[2]. 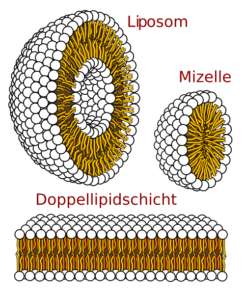 What is their job in the body ?

They occur in the form of biomembranes in different ways. For example, they may be micelles, globular structures in which the lipophilic taillets point inwards, and the heads externally. Another way for them to form biomembranes is in the form of lipid bilayers. These are found in every cell and make their walls. Here are each a row together which with the head down, and another which the head upwards stretches. They can also form so-called liposomes. Liposomes are globular lipid bilayers, in which the polar heads are stretched inwards and outwards, and between them lie the nonpolar taillets. Phospholipids are responsible for the typical membrane structure. It is also very likely that they will be used as biomarkers for cancer treatment in the future[3].

Do you also find phospholipids in cosmetics?

Yes, as so-called lecithins. Lecithins are derived from soya and are phospholipids composed of fatty acids, glycerine, phosphoric acid and choline. They occur in human, animal and plant membranes. It is essential for the formation of biomembranes and is an important component of lipid metabolism. It consists of a phospholipid, which has choline as binding partner to the phosphate. Choline is a so-called quaternary ammonium compound which carries a positive charge on the nitrogen. This property makes it a zwitterionic surfactant. Lecithin finds e.g. in the food industry, as a baking ingredient, for the production of sticky doughs or as consistency in chocolate application. In cosmetics, they are used because of their moisturizing and pH regulating properties. They thus support the skin's natural protective coating, and its high content of linoleic and linolenic acid counteracts skin diseases[4].

Article on lecithin and genetic engineering[4]

Dexpanthenol - What is it and what does it do in cosmetics?

Emulsifiers - What are they and what do they do in cosmetics?