Peptides are substances that consist of amino acids linked to peptide compounds. They are found in every organism and make up all proteins[1].

What are peptides chemically?

Peptides consist of amino acids, which are connected to each other by peptide bonds. Peptide bonds arise when two or more amino acids form an amide via their amine (NH2) and carboxyl (COOH) with elimination of water. Organisms may form peptides with L-form amino acids, since these are genetically encoded in the tRNA for production. They can be subdivided further, so are peptides up to an amino acid number of 10 so-called oligopeptides, up to one of 100 polypeptides and from 100 amino acids in a chain macropeptides. In addition, there are glyco- and lipoproteins, to each of which sugar or fats are bound. Ring-shaped peptides are called cyclopeptides and also form a subgroup. The macropeptides are also called proteins, where proteins have the property to fall away and to find in certain forms together[2].

What is their job in the body? 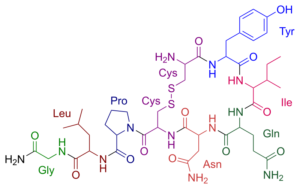 Fig. 2 The structure of the neuropeptide oxytocin, with stained amino acids (nine total).

How are they made?

In the body, ribosomes help to produce proteins. Here, long chains of peptides are synthesized on them, which then unfold. In this way, selectively certain sequences can be produced. Synthetically this is not so easy. In the laboratory e.g. these ribosomes are missing, and the auxiliary enzymes that form the correct sequences. Therefore, in addition to the gewüschtem product also a variety of by-products. In order to obtain specific peptides and sequences, one uses either certain substances as a "protecting group" or enzymes that prevent the synthesis of by-products[4].

What are you doing in cosmetics?

Peptides are often used in cosmetics, and advertised as anti-aging miracles. They are intended to reduce wrinkles, and thus ensure a smoother skin. They are synthetically produced and therefore mainly used in conventional, but not in natural cosmetics. Their effects have been studied only partially, but make a good impression on a proper mode of action[5].

Article on peptides in cosmetics[5]

Emulsifiers - What are they and what do they do in cosmetics?