Glycols are so-called dihydric alcohols, more specifically under the name 1,2-diols. They are characterized by two hydroxide groups, and have different uses and uses[1]. 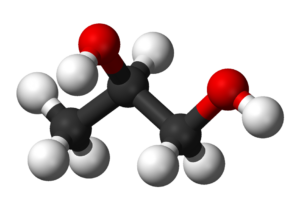 What are glycols chemically?

The diols all have very low freezing points of -14 to -55 ° C, are usually slightly to strongly viscous, form explosive vapor-air mixtures, smell and taste sweet and have good dissolving and lubricating properties. They are characterized by two -OH groups, which makes them dihydric alcohols (di - two | -ol suffix for alcohols). They are made into polymers in the chemical industry because of their two -OH groups. Most glycols are toxic and have neurotoxic (neurotoxin) and nephrotoxic (renal toxin) degradation products, such as. Glycolic acid and oxalic acid[2].

What are glycols used for?

Glycols are used as antifreeze, coolants and deicers because of their low freezing points. They are also used as hydraulic fluids, solvents and emulsifiers in chemistry and as washing raw materials. For example, also ethylene glycol and propylene glycol, with ethylene glycol being largely replaced by its high toxicity by propylene glycol[3].

Why are glycols in cosmetics?

In cosmetics, glycols are mostly used, due to their viscosity and polarity, as emulsifiers, or carriers for antioxidants, odors or active ingredients. Often, propylene glycol and polyproylene glycol are in use because they master these tasks and are relatively non-toxic[4].

What is the problem with glycols in cosmetics?

Polypropylene glycol (PEG) makes the skin more permeable, for active ingredients and pollutants. It can help as well and hurt, which is why it is criticized. However, since it is not itself toxic, it is considered acceptable to most manufacturers and authorities. PEG can cause allergies by making the skin more permeable, it helps active ingredients to penetrate the body, but also pushes unwanted substances into the body, and that for a longer time than the cosmetic product works [5].

Existing alternatives do not yet exist, due to the propylene glycol, which has a very low toxicity, with all the sought after properties. It can be used as a substitute for polyethylene glycol, which makes the skin more permeable. It can also be derived from corn, is 100% biodegradable, irritates and does not redden, and does not disturb the immune system or the skin barrier[6].

Scientific article for the production of propylene glycol[6]

Article about propylene glycol in cosmetics[4]

Nanoparticles in cosmetics - are they dangerous?