Polysaccharides are long chains, called carbohydrates, which consist of smaller simple sugars, so-called monomers. They play an important role for plants and animals, and are partly useful for humans but also partly vital for survival[1].

What are polysaccharides chemically?

Fig. 1 The molecular structure of cellulose

The prefix "poly" states that the molecule is a long chain, with interconnected parts, the monomers (mono means single or one). There are different simple sugars, and all can be linked to polysaccharides. For us humans, glucose, fructose and galactose are the most important sugars. Polysaccharides can be "hetero" which means different, or "homo" which means the same. This designation indicates whether the chain consists of the same or different parts. Cellulose e.g. is a homo-polysaccharide, and hyaluronic acid e.g. is a heteropolysaccharide. Polysaccharides are essential energy sources, and serve the body as energy storage. As so-called glycocalyx they are an important component, the outer surface of the cell membrane. Here they connect the membrane proteins with the membrane lipids, whereby they themselves are directed in the direction of the extracellular (outer) membrane side. The glycocalyx layer makes up the blood group and is an important part of the blood vessel wall, so that its fluids do not "overflow" into the tissue. They are also responsible for cell-cell communication and thus important for the immune system[2]. 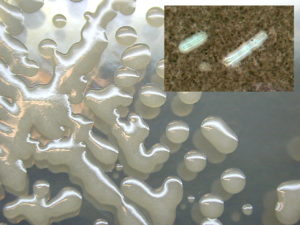 Fig. 2 The glycocalyx of bacteria

Where are polysaccharides used?

Polysaccharides, in addition to their natural utility as energy storage and membrane constituents, find application in the food industry as e.g. Agar, a vegetable alternative to gelatin for cakes and the like, and in cosmetics as bodying agents, or humectants. They are also used as detergents, drug carriers in medicine and fragrance carriers or fragrance neutralizers[3].

What do polysaccharides do in cosmetics?

Polysaccharides in cosmetics usually provide a gelatinous or creamy consistency, e.g. Xanthan Gum, Gum Arabic or Algin. These binder properties make polysaccharides very useful for natural cosmetics as they are almost all derived from natural sources, are skin-friendly and perform well. Algin is similar in its properties of hyaluronic acid, since it can hold about 100 times its own mass as water, and thus is used as a moisturizer. Deodorants use Destrins, more specifically cyclodextrins, to trap fragrances to neutralize odors, but they can also be used to counteract the effects of storing fragrances and releasing them over a period of time[4].

Report on the Benefits of Polysaccharides in Cosmetics[4]